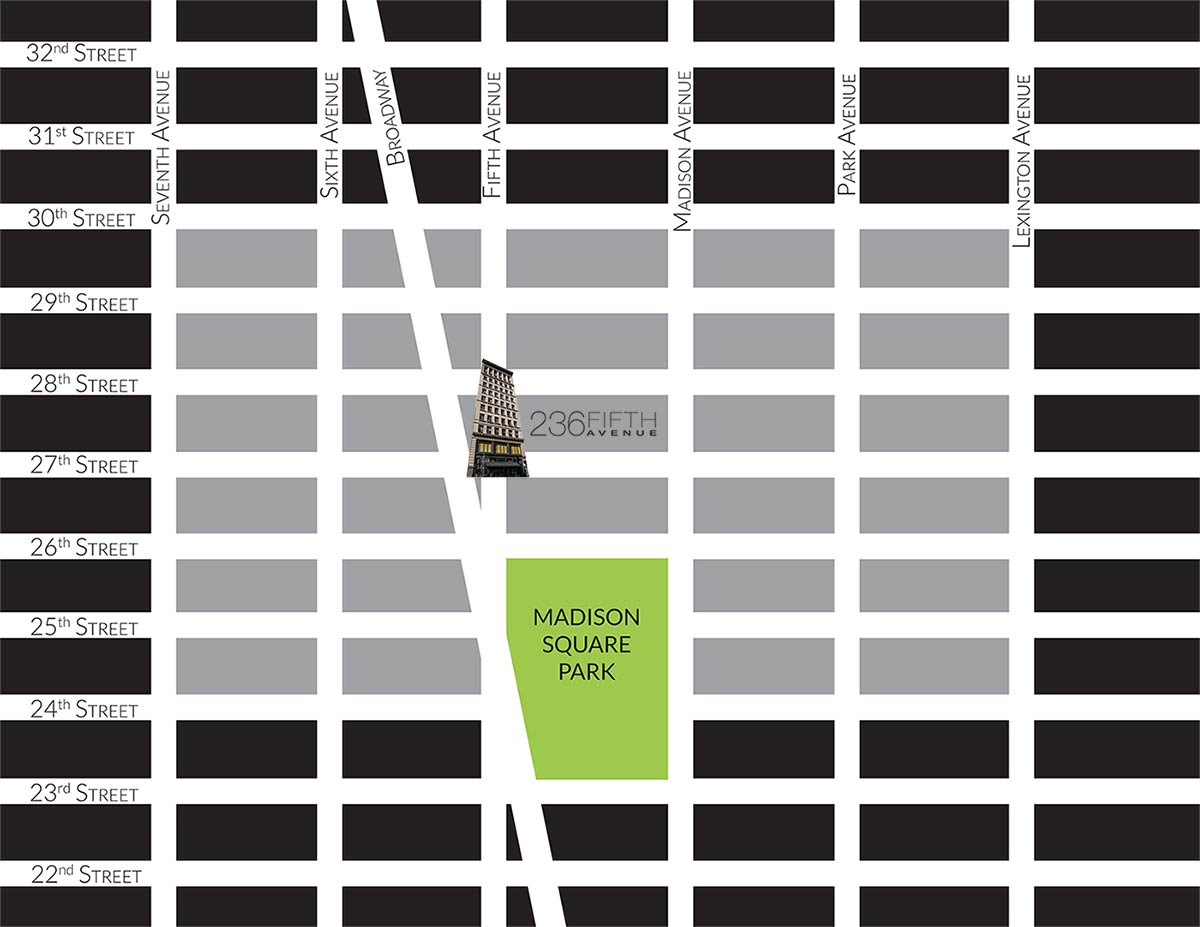 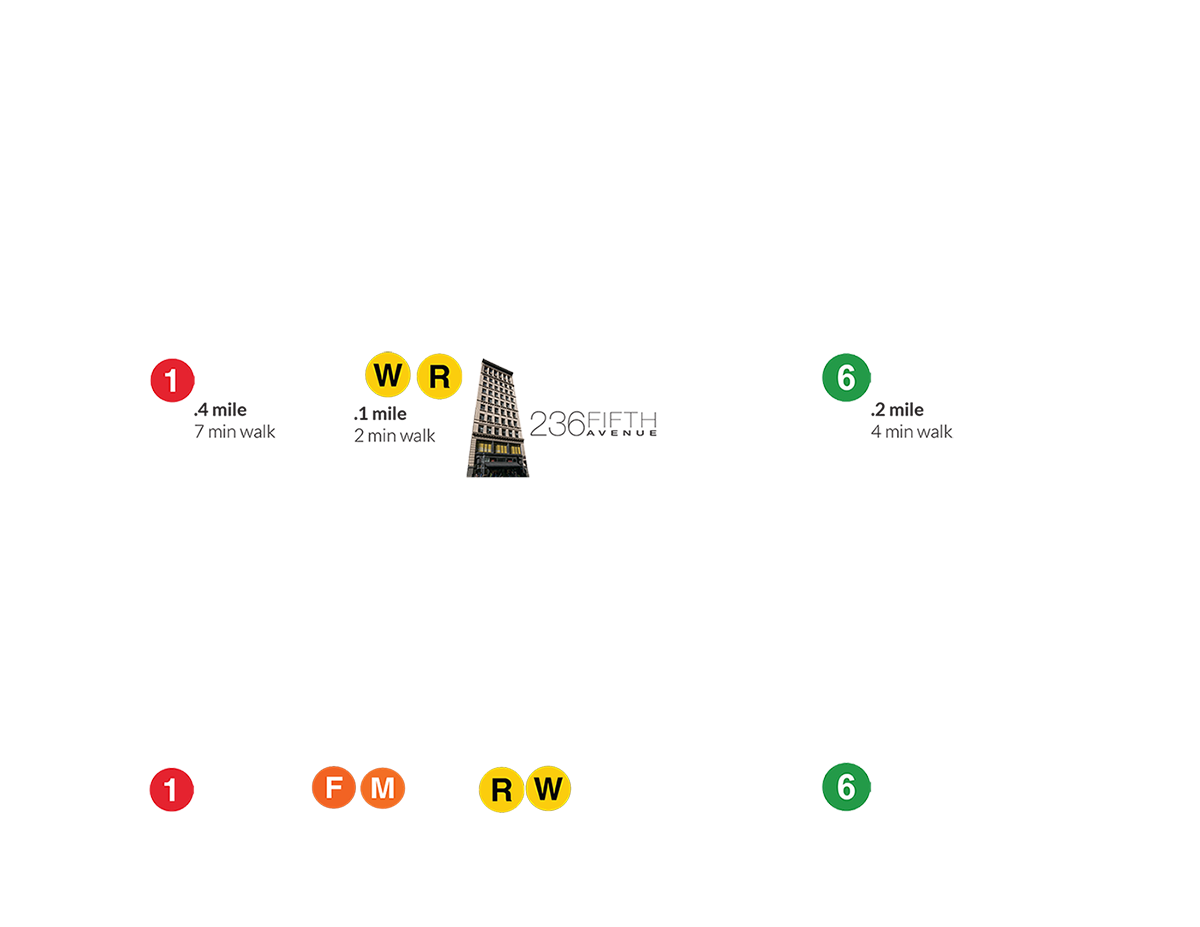 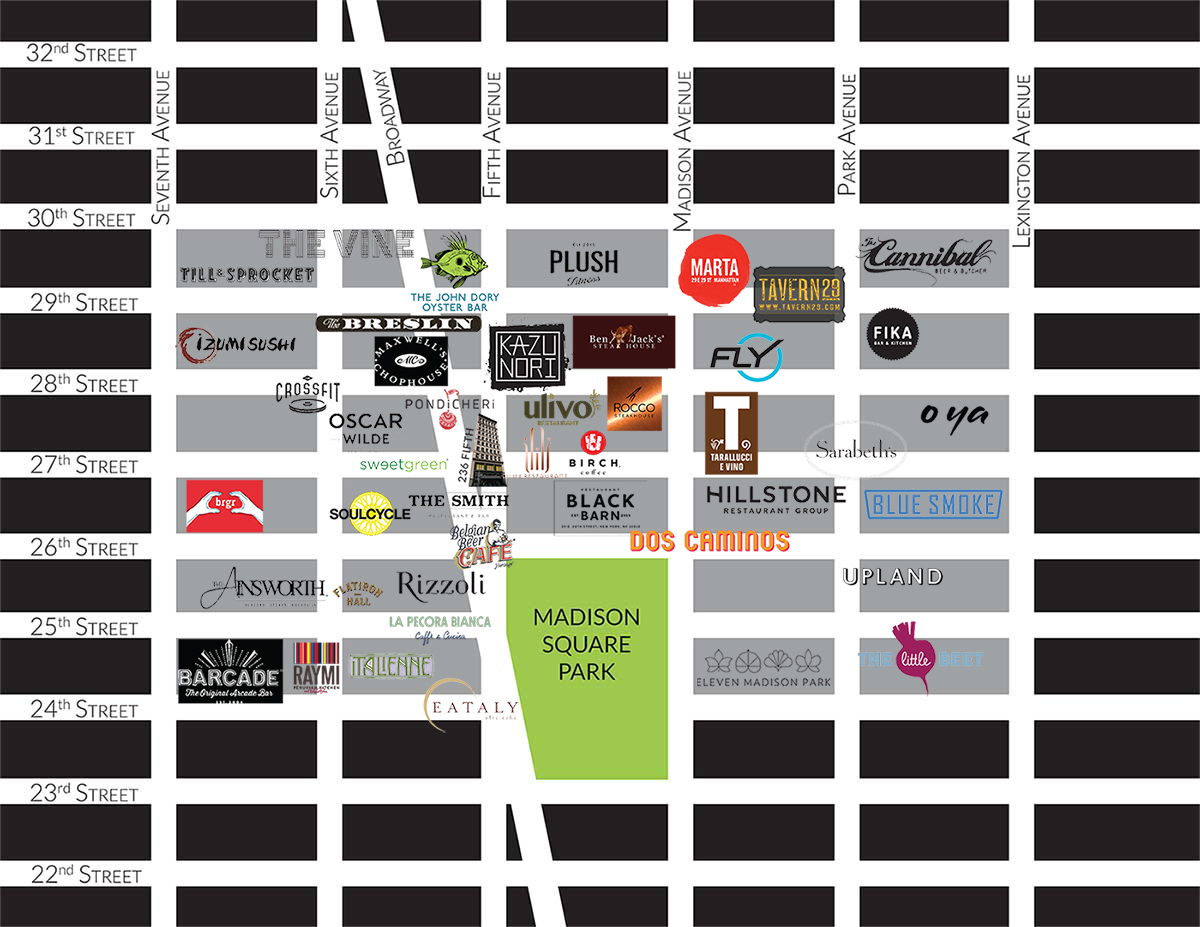 Spend A Day In
Nomad

NoMad got its name from its location, just north of Madison Square Park, which was once a military parade ground. In fact, to this day, the park still serves as the starting point for the city’s annual veteran’s day parade.

NoMad is a vibrant urban center. Certainly, one of the hottest neighborhoods in Manhattan, and 236 Fifth Avenue overlooks it all!

Just around the corner from 236 Fifth is Pondicheri a casual restaurant and bakery that got its start in Houston. Located at 15 West 27th Street, the menu at this Indian-inspired eatery boasts such delights as saag paneer and lamb keema. And for breakfast (yes, breakfast) you can enjoy masala eggs or turmeric soup. Also, the “Slumdog” sandwich features a chickpea hot dog!

For a taste of old New York, take a walk around the block to Gilsey House, NYC, located at 1200 Broadway. Its grand architecture is a perfect example of the French Second Empire style. Initially built for Peter Gilsey, a Danish merchant and city alderman, it opened as a hotel in 1872. Its 300 luxurious rooms were furnished in the latest trappings of luxury for the time. So, it attracted such luminaries as Mark Twain, Diamond Jim Brady, and Oscar Wilde. The building attained landmark status in 1979, and today it houses modern luxury co-op apartments.

Meanwhile, down the block is 45 West 27th Street, another building with a colorful history. Once the home of the Prohibition Enforcement Headquarters, it now houses the longest bar in NYC at 118 feet! At Oscar Wilde, a restaurant named for the famed author, that offers modern cuisine in a Victorian-era setting. It’s also home to an extensive collection of Victorian art and artifacts, and the attitude that life should be lived to its fullest. With “Wilde” abandon!

1 · Start out with breakfast and try the New Yorker at Pondicheri, a protein packed dish of eggs and tandori smoked salmon. 15 West 27th Street

2 · Head down the street for a powerful mind-body experience with a 45-minute indoor cycling class at SoulCycle.12 West 27th Street

3 · Stop at Rizzoli for leisure reading and pick up a few tomes of American or international literature. 1133 Broadway

4 · Take a trip back to the Gilded Age for lunch at Oscar Wilde’s, where the extravagance of the period can be seen in every corner of the restaurant. 45 West 27th Street

5 · Take a break from bustling traffic in the urban sanctuary of Madison Square Park, where you can listen to performers while enjoying the art installations, flora and views of the Flatiron Building. 11 Madison Avenue

6 · Continue the cultural exploration at the Museum of Sex and attend an exhibition showcasing artifacts from different continents and time periods. 233 Fifth Avenue

7 · Enjoy the views on Broadway, where Manhattan’s architectural landmarks fill the skyline including the Empire State Building and Gilsey House, a luxurious 19th century hotel. 1200 Broadway

8 · When the sun goes down its time for dinner at ilili, famous for it’s exquisite Lebanese ambiance and cuisine like Lamb Makloubeh and Baba Ghannouj. 236 Fifth Avenue

9 · End the evening with specialty cocktails at The Breslin in the Ace Hotel, which captures the essence of a classic New York City Tavern. 16 West 29th Street